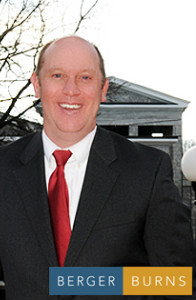 With practicality and effectiveness, Tom Burns works with clients to resolve their legal issues. He believes it is a best practice to resolve disputes respectfully and stays at the forefront of the Collaborative practice movement. In addition to holding a law degree and maintaining his membership in the Maryland State and Howard County Bar Associations, Tom has been trained in mediation and collaborative law and applies these alternative techniques when appropriate.  He has demonstrated his belief in the Collaborative practice movement by serving as the former Secretary, Vice President and President and on the Board of Directors for the Howard County Collaborative Professionals and as the Treasurer for the Maryland Collaborative Practice Council.

Tom began his career as a Law Clerk to the Honorable Susan M. Marzetta, General Master of the Circuit for Baltimore City from 1995-1996.  He went on to work for the Legal Aid Bureau, and later, the Baltimore City Department of Social Services.  Tom handled numerous child abuse and neglect cases, representing both children, and later, Baltimore City in these matters.  This work provided valuable trial experience and cultivated an interest in working with families who are seeking resolution for their legal and practical issues.

Later, Tom broadened his experience in a private practice firm that focused on domestic matters, civil litigation, elder law issues, guardianship and probate.  Today, he enjoys working on a broad range of practice areas at Berger & Burns, LLC, the firm he co-founded in 2009 with his partner and friend, Victor Berger. Tom is also a divorce survivor, and as such, brings empathy to his clients in his domestic practice.

He and his current wife, Kristin, a Maryland native, reside in the Baltimore area.  From his first marriage, Tom has a daughter who attends school in Howard County and who brings him much joy.  Tom is also an avid sports fan and he enjoys attending sports events among his many pursuits.